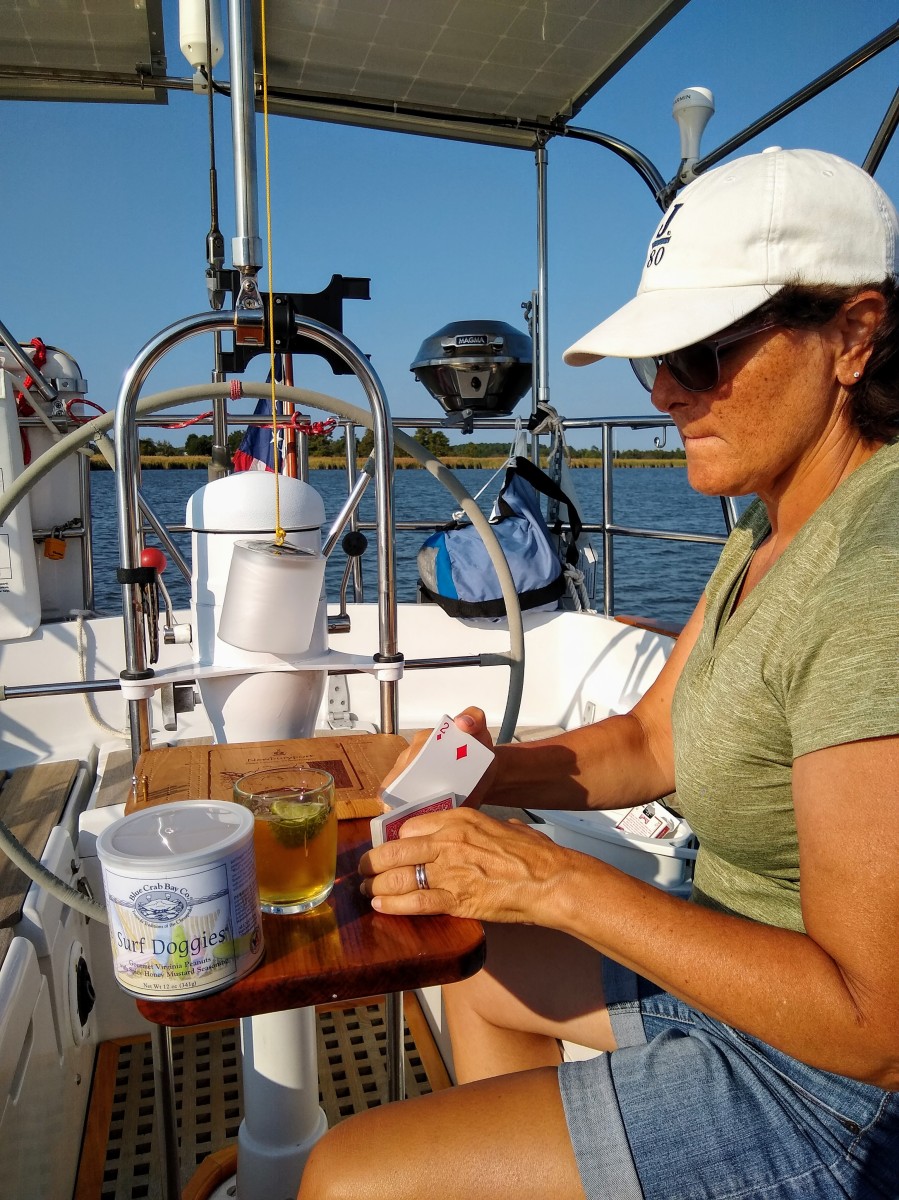 The friendly town of Georgetown is nestled up into the serene Sassafras River (too big to be called a Creek?) of northeastern Maryland. This is our next port of call, as we proceed south down the Chesapeake Bay. About 4 hours of light motoring (ugh) moved us to Georgetown from Chesapeake City, leaving us plenty of time to get familiar with surroundings before sunset. We had fought (more like mildly argued) with lack of wind and a bit of counter-current, but not much really to overcome by a bit more diesel flow.

After catching our mooring ball (more on that in a bit) we dinghied over to check in and take lengthy hot showers at Sailing Associates.

Now squeaky clean, we walked another hundred yards over to The Fish Whistle, at the Granery (another marina). All buildings here were burned by the British during the War of 1812, so you won’t find early American architecture. From our perspective there still isn’t much to Georgetown other than a few (constructed more recently) marinas, except… one absolutely fantastic restaurant. It’s worth going there for the freshly-made guacamole alone! But top it off with great service, many local beer choices, and ultimately delivering more than just crab cakes, and we have a true winner!

What about the moorings balls?

Upon arrival in Georgetown we discovered that the smallish mooring buoys were sans pendants. See photo below (not of actual buoy but just stock photo from internet).

Now imagine that the top shackle ring (shown above standing so proudly upright) is laying down flat making it difficult to grab with a boat hook. So upon approaching this anomoly we soon realized this was a challenging new impediment to overcome. While Kelly stood scratching her head at the bow, holding the now useless boathook, I circled our boat around trying to think of what to do next. Now imagine again (sorry we neglected to get photos of this fun) that the ring doesn’t lift easily (stiffly corroded) and is located about four feet below our rail. Hmmm, this should be fun.

While slowly idling Fayaway around the moorings we pulled KoryKory (dinghy) alongside, and Kelly lowered herself down to it with a dockline. I then motored Fayaway back into position with KoryKory alongside the buoy. She could now easily reach the miniscule ball and lift the ring without hanging from her toes over the lifelines. She slipped the line through the ring and handed it back up to me at deck level. I proceeded to tie it off at the bow. Phew! Turned out not to be such a crisis after all. And we learned something new. After taking time to research this issue, it turns out to be not so uncommon. For example, one solution is to first lasso the offending buoy in order to make time to tie up properly.

Our coup de grace occured as we left the marina’s registration area. Another cruising couple approached and thanked us for our buoy entertainment. At first their comments struck me as offensive but they further explained how they had experienced the same event earlier that day, and were actually applauding our “dinghy” solution. After further pleasant conversation, we wished our latest new friends a good day!

Between watching a playful pair of young bald eagles and the setting sun, we enjoyed more cribbage with a Mt Gay and soda. We slept peacefully at our quiet mooring location for two nights. While the physical activity of dropping the mooring was easier than picking it up, we felt forlorn to leave this tranquil spot.